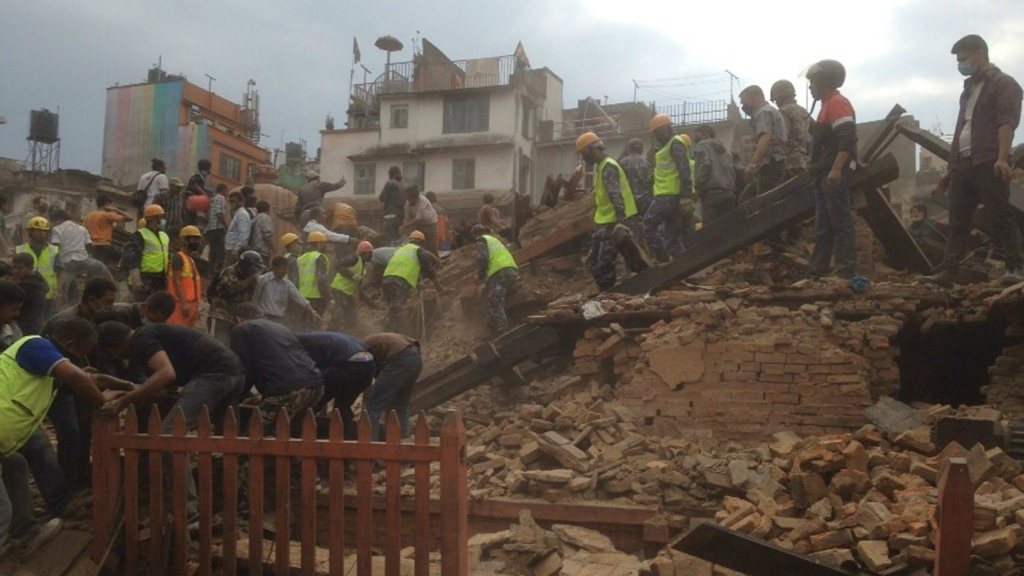 Today, Saturday April 25, 2015 at 11:41 in the morning there was a major earthquake in Nepal.  There are over 1,000 fatalities being reported at this time and that number is expected to rise.  As we mentioned in a previous post, a medical team from One World One Heart Foundation was leaving for their journey to Nepal for the April 2015 Medical Camp.  They are still there and were in Nepal during the earthquake.

Thankfully we have heard from the medical team and all members are safe and accounted for!

This is not so however for many in Kathmandu and the surrounding areas. According to an article published in The Guardian today:

“More than 1,000 people have been killed after a major earthquake hit Nepal, toppling buildings in the capital, Kathmandu, and triggering avalanches in the Himalayas.

Nepalese police said the death toll in the Himalayan kingdom had risen to 1,130, while 34 fatalities were reported in northern India and one in Bangladesh.

Most of the Nepalese fatalities are from the Kathmandu Valley, where 634 people were reported to be dead, with at least 300 more in the capital.

Nepalese authorities earlier warned there were also likely to be significant casualties in the remote districts nearer the epicenter of the earthquake, 50 miles north-west of Kathmandu.” 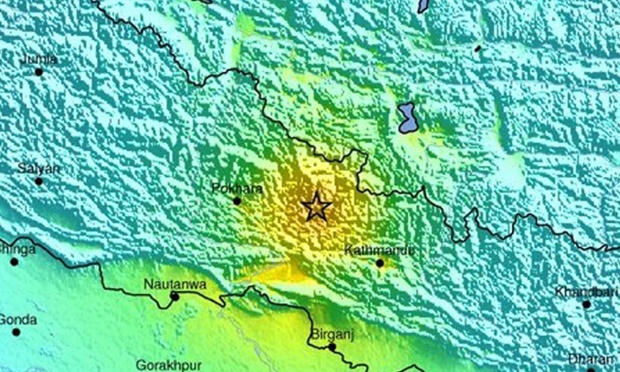 A map released by the US Geological Survey showing the location of the 7.9-magnitude earthquake. Photograph: USGS/EPA

The article goes on to quote Jamie McGoldrick, the UN resident coordinator for Nepal, as saying,

“It’s difficult to say the extent of the damage. A full-scale assessment is not yet complete, but this was a particularly large earthquake and a very shallow one so we are expecting high and significant damage, especially in Lamjung, Gorkha district [the epicenter of the earthquake]. There’s no doubt it’s a very big earthquake, but we are fortunate it was not in, or closer to Kathmandu, or the impact would have been catastrophic.”

In addition to the damage in cities and towns, the earthquake in Nepal also triggered massive avalanches on the nearby Himalayan mountains, including Mt. Everest.  There are preliminary reports from the Mt. Everest base camp that at least 13 are believed to have died on the mountain and many others were badly injured at base camp by falling ice and debris.  Helicopters were being called in to evacuate all those in the area

The full extent of the damages after the Nepal earthquake aren’t yet fully known.  It is obvious though that there has been much devastation and many will need to mourn loved ones lost and rebuild homes, temples, schools, hospitals, and other community structures.  We are praying for the safety of everyone there and ask for all of you to do the same.

If you would also like to make a contribution for Nepal Earthquake Relief we’re uniquely poised to help you make the most of your donation.  We already have teams and resources in place to help provide needed services and help with rebuilding efforts.  Plus, 100% of your donation will go to earthquake relief efforts in Nepal.  One World One Heart Foundation is staffed entirely by volunteers and has no overhead costs.

Currently, communications are very difficult there.  As we hear more for our medical team in Nepal though, we’ll share updates here and on our Facebook page.

Please keep everyone in Nepal in your thoughts and prayers.